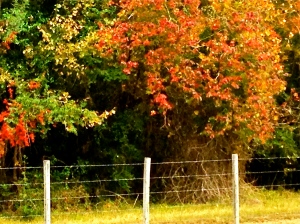 Dallas and Fee are standing on the edge of the big clearing peering out across to see a terrifying site. Underneath that grove of oak trees on the other side of the big open space they see a huge group of wild hogs. Because Dallas has been to the deer lease and Aunt Linda’s farm a number of times she is very familiar with all the dangers of the woods. At the deer lease she has seen those wild hogs. The big wild male hogs, also called a boar, can sometimes top one thousand pounds. They also have big tusks. Those big male hogs can have significantly larger tusks than the smaller female sow, as the female hog is called. Because of their size and structural differences, boars tend to slash and stab, while sows tend to bite, in their use of these teeth as weapons. Being a savvy country dog Dallas quickly informs Big Fee what they may be up against. They must get to the other side of that clearing to get back to camp. Dallas spotted a gate across that clearing that meant if they could get there they could crawl under the fence and get somewhat of a lead on the hogs. What a dilemma and lesson to always have a plan before you go out venturing in the woods. Can’t worry about that failure to plan just now. Fee says, “Dallas you’re in charge to get us across safely”. Dallas calls all the pups to their side and very calmly informs the rest of our gang what we’re up against. Poor little Willow almost fainted at the mention of those boar hogs with the large tusks and the fact they could all be eaten alive. Willow starts to wail and say I never knew camp would be like this! I am gonna be eaten alive by a pig. I thought pigs were those cute little chunky animals in the farmyard that said, “oink, oink”. She almost starts to yelp really loud but Hank put his paw over her mouth really quick. They couldn’t give away their location or that they were even nearby or the hogs would stampede them. There must have been one hundred hogs in that pack. Shhhhh. We can only use sign language until we are out of danger. Dallas lays out the plan. They are gonna sneak around the outer perimeter of the clearing, dodging in and out of the trees very quietly trying to stay out of sight. It’s decided that Bear will lead the way, then little Willow, Luke, Coco, Hank, Felix and then me. I tried to spread out the big dogs with the smaller dogs in case there’s trouble. We are all fast runners but a wild hog can run up to 30 miles and hour. They can jump over fences less than three feet high and have been known to “climb” out of hog traps with walls 5 to 6 feet high. I have given all the pups this grim information so they could understand the seriousness of our situation. No mistakes or we don’t make it out alive. I have told everyone since it’s really hot and the sun is bearing down if we have to make a run for it don’t stay in the woods. Hogs can’t take much heat because they don’t sweat so they tend to stay in cool moist areas to maintain normal body temperature. If they tried running across the clearing our best chance is to try and overheat them before they catch us. Little Willow just fainted. Oh great, now we have a sick pup on our hands. Bear to the rescue. He waves his big bushy tail in Willows face and she comes to. She said, “I’ll be ok, I promise”! I can’t let the team down.

Here we go. We begin to make our way through the trees as planned. So far so good. Everyone is following the plan perfectly. All of a sudden a big tree limb comes crashing down in the woods. That happens all the time. But why did it have to happen right now. That spooked the hogs. Hogs can smell even better than deer. They can detect a scent that has lingered for days. Their eyesight is very keen and can detect a person over 100 yards away.  But most of all they have an acute sense of hearing. The big boar out front starts grunting and pawing the ground and heads our way. Oh Lord, help us I pray as I say a quick prayer to God. You can do that you know. God is always listening. Even in the midst of a dangerous escape. I signal for everyone to run across the clearing as fast as their little feet will take them. We are almost across the clearing when all of a sudden right in front of us is standing the biggest pack of coyotes I can even imagine ever wanting to see. Lord, now what are we gonna do? I remember Radar telling me years ago in his pact with the Coyote leader, Aztec, that we would never come back into his territory. I guess we should have taken that other fork in the road. Those coyotes started advancing slowly towards us then broke into a fast run. I’m told a coyote can run up to 43 miles per hour. We’re goners for sure. Mama! Those coyotes split into two groups and ran right around us towards those hogs. I guess the hogs looked like a bigger meal than us piddly little pups. We turned to see those hogs making a turn really fast. It was a sight I will never forget. Come on gang, let’s get home.